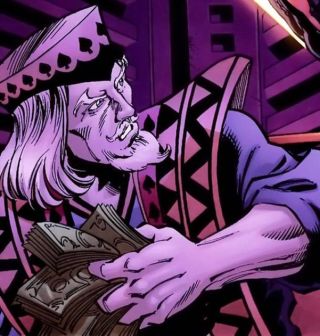 Bonuses: His Invulnerability and Regeneration Powers make him essentially immortal.

Ed's Notes: Leader of the most overrated villain team-up in comic book history, the Royal Flush Gang.  How the hell can these fools take on the JLA?! Take out Ace and they're physically Batman villains that are about as smart as Flash villains.

The JL Sourcebook leaves off his Powers and gives him the very unfortunate Drawback that he's dying of Lung Cancer. But Hey!: It give him an 55 Hero Points. (lol) It also gives him:


Razor Cards [Body: 4, EV: 5] Bonus: King can throw up to eight cards in a single phase: add one to the final dice roll (after re-rolls for doubles) for each additional card thrown parts the first.