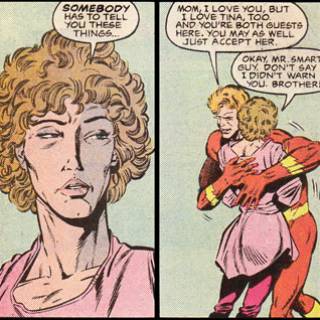 Drawbacks: Serious Irrational Attraction to involving herself in Wally's life and decisions.

Source: Who's Who, 3rd Edition


Ed's Notes: Wally West's mother, Iris West's. (Barry Allen's Sister-in-law) I've always felt that killing off Barry Allen was the biggest mistake DC made with Crisis on Infinite Earths.  And since DC Heroes was developed in the wake of that, while they do stat-out Barry, WALLY is really considered The Flash. Personally I prefer him as Kid Flash, with Barry filling the big boots. I bring all this up because, without Barry, IRIS West (his love interest) becomes a minor, if not insignificant character... To the point that I can't find a sheet for her in ANY edition of DH Heroes, 1st, 2nd or 3rd!  I will probably stat her out at some point, using Mary's sheet here along with Lois Lane's and Vicky Vale's as additional reference points. (Iris was also a photo-journalist and gossip columnist early on in the flash Comics.) And what's a superhero without a damsel in distress to rescue, am I right, guys?! (Yes, I'm joking. That's lazy writing. Do better than that with your female characters, even if they aren't super-powered!)  Also, my mother seems to have that same Drawback. Does yours? Don't they ALL? ;)