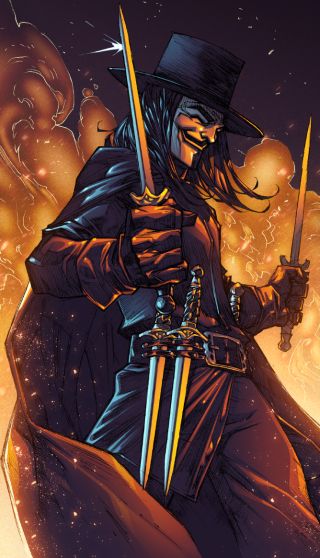 Drawbacks: Strange Appearance (both with and without his Mask); Magician's Code (see below)


Ed's Notes: "Voila! In view a humble vaudevillian veteran, cast vicariously as both victim and villain by the vicissitudes of fate. This visage, no mere veneer of vanity, is a vestige of the “vox populi” now vacant, vanished. However, this valorous visitation of a bygone vexation stands vivified, and has vowed to vanquish these venal and virulent vermin, van guarding vice and vouchsafing the violently vicious and voracious violation of volition.


The only verdict is vengeance; a vendetta, held as a votive not in vain, for the value and veracity of such shall one day vindicate the vigilant and the virtuous.
Verily this vichyssoise of verbiage veers most verbose, so let me simply add that it’s my very good honour to meet you and you may call me V."


I tried to keep as much of the Writeups.org entry intact as I could, adapting for DCH 3rd Edition Rules, but I changed a few things, that didn't make sense to me, mostly in his Skills. I did keep the Magician's Code Drawbacks because, as stated in Writeups.org, V’s behavior is surprisingly similar to that described in the Magic Sourcebook as the Magician’s Code – even thought there’s nothing mystical about V. I agree with this judgement, so it stayed.

I will be adapting more of the non-DC Cannon Charterers, like the Watchmen. I'm also thinking of including a picture of the  cover where everyone's made their first appearance, whenever I can find it, just for some additional eye candy. Lol...