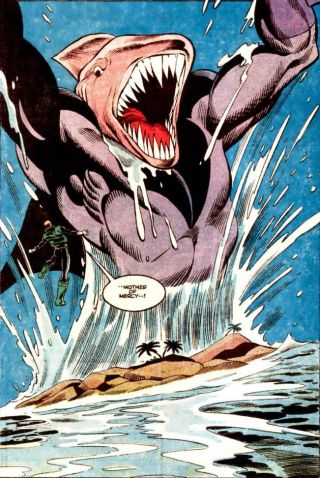 Bonuses: Can use Matter Manipulation to surround himself or other with an invisible Force Field. This field can be be yellow to protect from Green Lantern rings.

Limitations: Str is only 10 outside of the water.

Drawbacks: Serious Irrational Attraction to making his victims feel fear before killing them; Serious Rage; Strange Appearance; Loss Vulnerability: Can be reverted to a normal shark if exposed to certain kinds of radiation (AP's of radiation act as AV/EV, against an OV/RV of the Shark's Will/Will. When RAP's exceed the Shark's Mind, he reverts back into the for of a normal, Tiger Shark shown below.

Drawbacks: Serious Rage; Fatal Vulnerability to being removed from water:  As a normal shark, can only breathe in water. If removed he will suffocate in six minutes.


Ed's Notes: 2nd Edition leaves out enough detail to warrant it's own entry. How the FUCK is this guy not an Aquaman villain?!