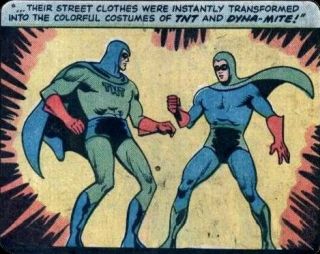 Ed's Notes: Wonder Twin Powers... ka-BOOM! A worthy sidekick to T.N.T., who became a respectable hero in his own right. This could be a REALLY interesting character to play, especially if another PC was willing to play the mentor, T.N.T., to be killed off after a game or three.  He's got room to develop. Also, as usual with sidekicks, why doesn't he have: