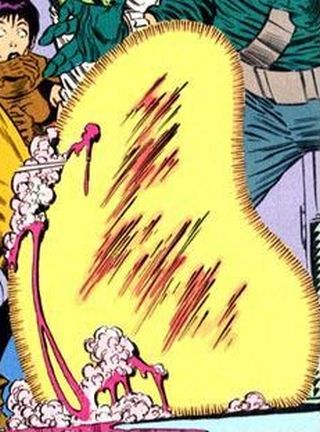 Ed's Notes: This one was probably changed the most of any of the Omega Men from the 1st edition.  Powers were made to more closely resemble those of the typical Roguian. Shrinking was left off. Energy Blast was changed to Force Manipulation, keeping the same rating. Bomb was left off, since he could effectively mimic that power via Force Manipulation (though at the lower rating.) And the Physical Restriction (which should have been part of the typical Roguian entry as well) was rated as "Minor," even though it would normally be "Serious: (at least) because he can effectively create "arms" through the use of Force Manipulation as well. Se it's really not a Restriction at all. The toughest part was his Body. In 1st Ed, it's 12. But that gives an RV of 24, and I don't think he's supposed to be THAT tough. Typical Roguian is 2. I went with 3, which puts his RV at the top fo the 13-15 Column, just below Superman's class.