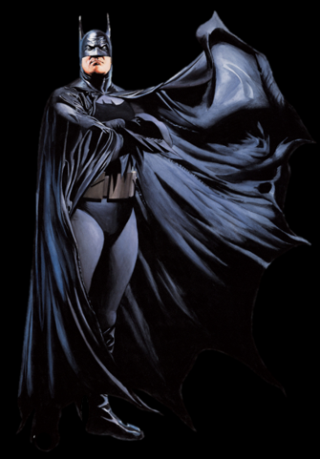 Drawbacks: Catastrophic Irrational Attraction to Seeking Justice; Secret Identity; Traumatic Flashbacks: Relives the deaths of his parents whenever he is within Crime Alley, and relives the death of Jason Todd when he sees Robin take damage in Killing Combat

Bonus: If given the change to cast his bat-shadow down upon his adversaries before they are aware of his presence, he receives a -1 Column Shift bonus to the OV of the ensuing Intimidation attack.

Batcall [Body 4, Animal Summoning: 13, R#: 4] Limitations: Only summons bats from beneath Wayne Manor; Will not function is more than 13 AP's from Wayne Manner

Razorwings (x8) [Body: 6, EV: 2] Bonus: Can thrown up to four in a single phase and adds one to the final die roll for each addition Razorwing thrown after the first.


Ed's Notes: This is the slightly nerfed (though not really) version that was updated in the 3rd Edition.  A couple of changes that I would make in game play: