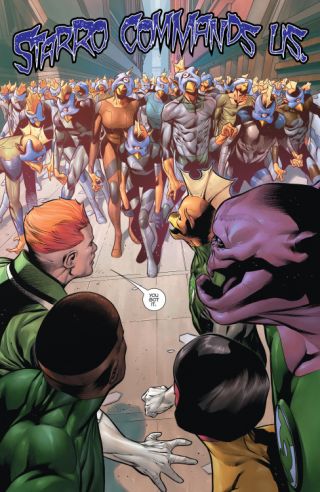 Bonuses: Control has Area Effect; RAP's of Energy Absorbed are added to Power Reserve and can be used by Deputies or Starro himself; Power Reserve can be used to augment Flight, Energy Blast or Control Powers; Once AP's are added to these abilities hey are considered spent and and are subtracted from Power Reserve until replenished by absorbing more energy. The added AP's retain for AP's of time equal to  Energy Absorption Power (16), at which time the return to their normal levels unless augmented again.

Limitations: Growth is Always On and already figured into the above Attributes; Power Reserve begins at 0 AP's. One AP is added for every RAP's he absorbs through Energy Absorption, up to a maximum of 25, though excesses can be broadcast to other Deputies or Starro himself. Absorbed energy is retained indefinitely.

Ed's Notes: Why is their Dex so much higher when all other Attributes and Powers are rated lower?  Weird.