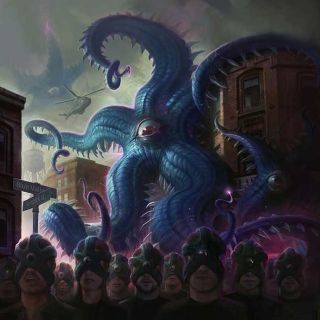 Bonuses: Control has Area Effects; Split allows Starro to turn three normal starfish into duplicates of himself. (see: Starro's Deputies) Split also allows Starro to spray forth thousands of "Miniature Starfish." RAP's of Energy Absorbed are added to Power Reserve; Starro Power Reserve can be used to augment Starro's Flight or Energy Blast or the Control Power of his Miniature Starfish: Once AP's are added to these abilities hey are considered spent and and are subtracted from Starro's Power Reserve until he replenishes it by absorbing more energy. The added AP's retain for AP's of time equal to Starro's Energy Absorption Power (16), at which time the return to their normal levels unless augmented again.

Limitations: Growth is Always On and already figured into the above Attributes; Power Reserve begins at 0 AP's. One AP is added for every RAP's he absorbs through Energy Absorption, up to a maximum of 50. Absorbed energy is retained indefinitely.

Ed's Notes: What's the deal with all of the early Justice League Villains having names that end in "O?" Amazo, Despero, Starro... This is one of the weirder ones to try and adapt into game terms.  Seems a bit under-powered to take on the Justice League, let alone ALL of Earth's Heroes at once, but then... In his first appearance he was taken down by fucking SNAPPER CARR, before he got his powers, mind you! Second Edition rates the Split power slightly differently (3 for the deputies, 10 for the miniatures) and does not change the Attributes of the Deputies from those of Starro himself.