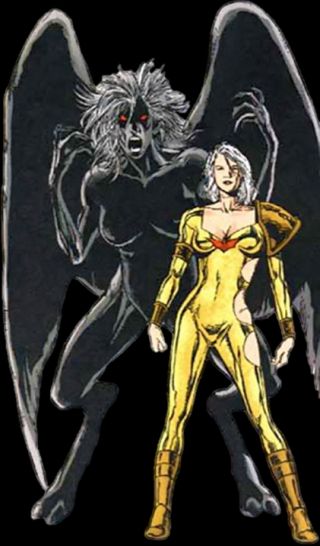 Drawbacks: Secret Identity;  Serious Rage: When triggered, she transforms into a being known as the Blood Avenger. While in this form, she has Dex: 12, Str: 16, Body: 15 and a Catastrophic Irrational Attraction to killing men and will go on a rampage any time she manages to break free of Fury's persona. Fury was cured of this condition in May, including the Serious Rage Drawback, after which her Physical Attributes increased to the higher values noted above.

Ed's Notes: Wow.  Just... DAMN. In the Golden Age, it would take some of the true heavy hitters (Dr. Fate, Green Lantern, Flash, Spectre) to stop the Blood Avenger. Anyone else, she'll tear through like tissue paper.

OK, I'm good. In all seriousness, this could have been three entries, one for Fury (Year One), one for the Blood Avenger and one for Fury after she was "cured." But this i show she appears in the sourcebook, so I figured I'd just keep it like this.