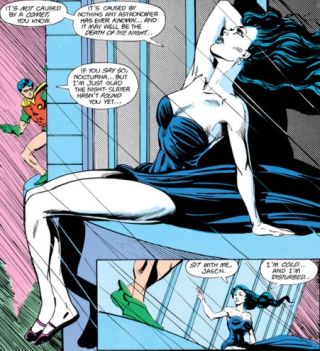 Shuriken (x4) [Body: 6, EV: 2] Bonus: Can thrown up to four in a single phase and adds one to the final die roll for each additional shuriken thrown after the first.

Ed's Notes: This could make for an interesting story. She was a Scientist (an astronomer) but was also the adopted daughter of a mob boss who went bad.  She loves Jason Todd and Bruce Wayne, and was an ally of theirs for quite a while before becoming an enemy. ( What's more, she is both the object of affection, and hatred, of Night-Slayer's. (And his adopted sister.)

I had to make a few changes from the 1st edition. Spy (Connoisseur) Skill became the Connoisseur Advantage. The Scholar (Astronomy) Skill became the Scholar Advantage, but I gave her the Scientist Skill at the former's rating (8) to make that usable. I also gave her the Weaponry Skill. I talk about this a LOT... What is up with giving people WEAPONS, but not the Weaponry SKILL. The Weapons already due less damage that her Martial Artist Skill would, why pile additional OV/RV Penalties on top of that?! So screw it. She gets Weaponry, linked. Finally, her equipment had to change a bit, due to the different rules from 1st to 2nd/3rd edition(s). I tried to keep them close to 1st edition when I could, but filled in the blanks using similar pieces of Equipment from other characters. BTW... Her "Crescent Belt" is a belt made of razor-sharp crescent moons that she can flay opponents with.  Just in case you were wondering.