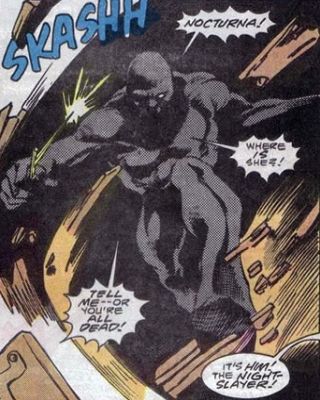 
Ed's Notes: A couple of 1st edition Batman villains coming before I move onto the Atlas of the DC Universe. Lol.  This guy was obsessed (in LOVE with) with Nocturna, until she rejected him. Then he went psycho. (And yet... He's still somewhat obsessed/in love with her.) With the exception of Martial Arts (which 1st Ed. didn't give him) he can match Batman physically, and even impersonated him for a while. I left the slightly higher Dex from the 1st ed to balance out the lack of said Martial Artist skill. (Batman's was lowered from 10 to 9 in the 3rd Edition.)  I added equipment from the 3rd Edition rule book. Nocturna is his adopted sister BTW, so... ew.