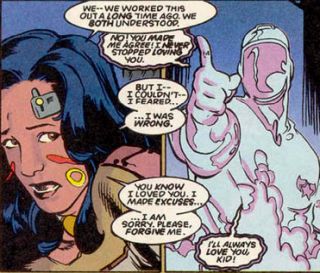 Source: 3rd Edition Who's Who; 2995 Legion of Superheroes Sourcebook, page 52


Ed's Notes: This is an example of what a possession by the Bounty Entity might look like for a character. Mental and Mystical Attributes, Powers and Skills come from the possessing entity, Physical Attributes, Powers and Skills come from the host. (Although, in this case, Dawnstar lost her wigs prior to this possession, thus her Flight: 42 is not listed here.)  What I'm not entirely sure of are how to treat the Mental Powers and Skills above. By the book, the possessed body should not have these. BUT... in the comics, she become one of the most feared Bounty Hunters in the Galaxy. That would seem... unlikely without those. So... I guess the entity can... stop(?) possessing her to let her use her Life Sense Power or Detective Skills (for example) and then go back to possessing her? I'll admit this is a bit confusing, and a bit of a mess, but I figure a template of some kind might be good to have anyway.