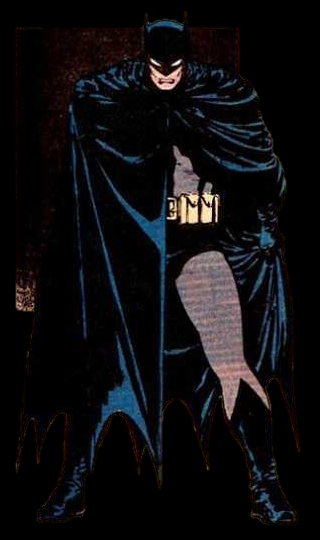 Drawbacks: Catastrophic Irrational Attraction to Seeking Justice; Mistrust; Secret Identity; Traumatic Flashbacks: Relives the deaths of his parents whenever he is within Crime Alley

Bonus: If given the change to cast his bat-shadow down upon his adversaries before they are aware of his presence, he receives a -1 Column Shift bonus to the OV of the ensuing Intimidation attack.

Batcall [Body 4, Animal Summoning: 13, R#: 4] Limitations: Only summons bats from beneath Wayne Manor; Will not function is more than 13 AP's from Wayne Manner

Razorwings (x8) [Body: 6, EV: 2] Bonus: Can thrown up to four in a single phase and adds one to the final die roll for each addition Razorwing thrown after the first.

Ed's Notes: This is the gritty Frank Miller, Year One version, based on the info in the Rulebook that Batman's Dex and Int started out at 7 & 10 respectively. The 2nd Edition of the game noted that he had the Mistrust Drawback (1st Year Only) so I've added that in, and removed the Connections (Superman, the JLA, Gotham PD...) that would appear in conflict with that. I left all of his gadgets, only because I really don't have a non-subjective basis for which ones to remove.