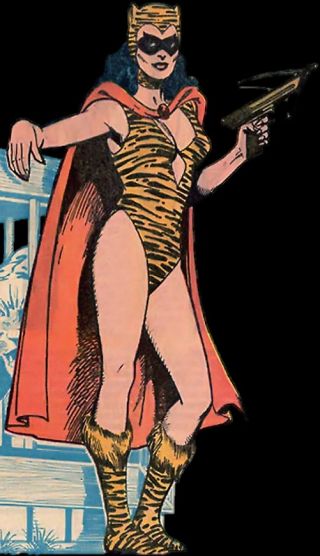 Ed's Notes: Me-yOUCH! The Golden Age Tigress is a badass! Another Femme Fatale of the Golden Age, the Tigress (originally known as the Huntress) was one of the few Young All-Stars that actually debuted in the Golden Age rather than post-Crisis as a fill-in. The WaW Sourcebook doesn't say where the arrows come from, or how many she has, or how long it takes to load the Crossbow... Assume [Ammo: 1], that she has a... bunch? on her... belt? and it takes either an automatic action or 1 phase to load? (Yes, that's a very different tactical situation, but either one is better than firing round after round with impunity! lol)