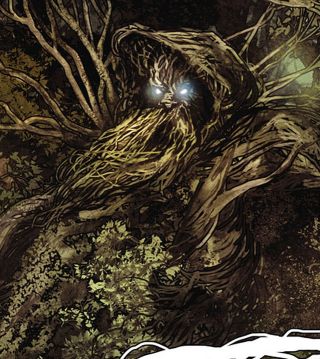 Drawbacks: Loss Vulnerability: All Powers require contact with the Earth; Miscellaneous: Unfamiliarity with the 20th Century

Ed's Notes: A druid from the time of the Roman Empire that was resurrected (or at least awoken from his eternal slumber) in 20th Century Gotham. This attracted the attention of Superman (even though...) and Jason Blood. He's pretty tough already, and I've made him a bit more so, Mystic Linking most of his Powers, as I saw fit. The one questionable stat in terms of Scale was hid Body of 9 combined with a Skin Armor of 9. This gives him an RV equal to Superman's, but I didn't feel that it really needed to be scaled down.  In 1st Edition, his RV is about a column or two below Metallo's RV in 1st Ed. (20) and his Body & Skin Armor add up to about the same amount in 3rd Edition (23), so I figure BT could remain as he was as well. He will be tough, yes, but still less so than Metallo, just as an example.