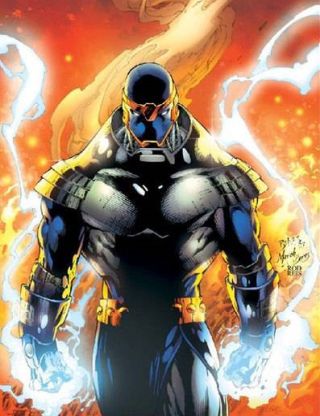 Equipment:
ARMOR [Str: 10, Body: 15, : 10, Control: 10, Energy Blast: 15, Flight: 6, Illusion: 7, Teleportation: 20] Limitations: Control can only be used to render an opponent motionless. (see Mental Freeze) Illusion can only be used to project a hazy image of himself for communication purposes.

Ed's Notes: This entry has been completely rewritten. It was originally adapted from Siskoid's Collections, which I further tweaked to bring him more in line with what I thought an older, more experienced version of Hawk. Two things... As Monarch, Hank Hall doesn't use his Hawk Powers. And then Mark sent me a page from the 1992 Q3 DCH Newsletter, which I would consider "officially published," even if it was preliminary, from Mayfair. So the entry no matched that, as my other entries match their published sources.

This is one I've looked forward to for a LONG time, and now that I've done it... Man. This guy ends up rather an underwhelming villain. Lol. First problem... In superhero, main-character terms... Hank Hall is an idiot: Int 3. No one that... mediocre is going to take over the world unless they have OVERWHELMING firepower. And that suit... doesn't. Speaking of which...

Rather than Mental Freeze, Mayfair used Control with the Limitation that it can only be used to Freeze an opponent. That's Mental Freeze! BUT, Mental Freeze wasn't parts of the game until 3rd Edition. So under 2nd Edition rules, they did it this way instead.  Now, the illusion is... fine. But it needs more range. 7 only gives it a range of 1/8 of a mile. So I'd like to see (or I would grant) something like a Radio Communications: 20 Power, with the Illusion contingent upon it. Something like that.

So , the suit is... Fine. But it doesn't amke him enough of a heavy hitter to take over the world, with a Int of 3. I mean... Lex Luthor has an Int of 14 and MUCH better tech than this, AND Kryptonite. And he's never really come even close to this level of success. But it still doesn't necessarily feel wrong to me, stat-wise. Armageddon 2001 was just a goofy story, I guess. I would have believed Batman. Or Hal Jordan. Or... yeah, I suppose even Captain Atom. But Hank fucking Hall is NOT going to kill everyone and take over the world with THIS TECH. No way. (Yeah, after doing this just now, I truly do think that this was the very first instance of DC trying to subvert readers' expectations and ending up with something stupid that everyone hated. Lol)