Limitations: All of his animal forms are green, with a human face.

Ed's Notes:  This is like Changeling, year one.  To make him consistent with the 3rd Edition version of Changeling, he should als have the follwoing:

Limitation: If he takes the form of a creature with Body of 5 or higher for three or more consecutive rounds, he take 1 RAP of Mental Bashing damage, which cannot be reduced though Last Ditch Defense.

And to answer Exusiai's question, below, his forms DID apparently have a (roughly) human face early on: 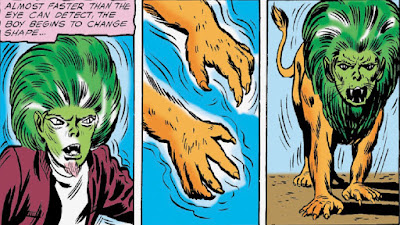