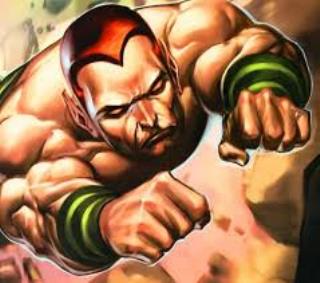 Bonuses: Amazo can use Adaptation Power on Skills and Attributes

Ed's Notes: A couple of changes that *I* like to make to both bring him up to 3rd Edition snuff and to be consistent with his original origin of having adapted all of the powers of the first JLA, not including Batman or Superman:

2) Lose the Sonic Beam, because Black Canary wasn't there. (Or increase it to 10, because that's what her's is rated at in 3rd ed.) (No: Delete it. It's pointless.)

3) Increase Flight to 15, grant Invulnerability: 16, and lower Stretching to 6, all to match Martian Manhunter. (The increases don't really matter though: The Green Lantern Ring is better in both cases.)

4) Give him Wonder Woman's Weaponry skill of 13, and increase Acrobatics to 11 to match her score as well.  Then give him her Lasso and Bracelets: